The baseball team took a long drive to Earlsboro starting on Thursday and ending with a 3rd place trophy on Saturday. Thursday, the Tigers played Earlsboro at their own tournament and dominated. Bryson Hays started off his season batting 1.000, and Josh Morrison and Reed Miller led the team with 2 RBIs apiece. They beat the Wildcats 16-1 and took the winning mindset into the next game against Oilton.

Oilton had not lost a game yet this season and came in strong against the Tigers scoring 4 in the first inning. Caleb Reid did an amazing job with 8 ks on the mound but, there were too many errors in the field. Union City held them and scored 2 of their own, and then scored 3 more runs in the 6th inning. The Tigers fell short and made their way to the 3rd place game. 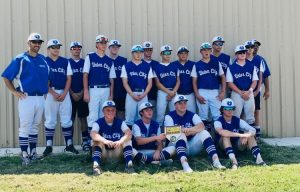 In this match, they played Clayton and started out on top but, Clayton wasn’t going down without a fight and it ended up being a tie ball game by the bottom of the 7th. Bryson Hays had an amazing game with two triples and 6 RBIs. Reed Miller set things up in the final frame with a HBP. Tyler Ross moved Miller around setting up a walk-off hit by Freshmen, Braydon Armstrong. The Tigers will be back in action at home today vs Verden beginning at 4:30.