The Union City Lady Tigers had their first home game last Thursday. The Lady Tigers defeated Cashion by a score of 12-9 in comeback fashion. These girls know all about hard work and dedication. This team of girls started fastpitch in the summer, working and practicing in the 105-degree heat, putting in work and sweat. It is safe to say that all the hard work and practice paid off when the Lady Tigers faced with the Cashion Lady Wildcats.

Freshman, Mackinzie DeLong started off slow on the mound but soon got into the rhythm by the end of the 2nd inning. After two innings of play, the Lady Wildcats held onto a 7-0 lead and things were looking bleak for the Lady Tigers. Then in the bottom of the third inning, the Lady Tigers got a spark going when Senior, Erica Rodger hit a double over the left fielders head bringing in Junior, Emily Loughridge for Union City’s first run of the game. The Lady Tigers got into the Cashion pitchers head as she walked 4 and hit 2 batters during the bottom of the third. By the end of the third, the Lady Tigers closed the gap and were down by a score of 7-5.  Union City eventually tied it up 7-7 in the 4th inning. 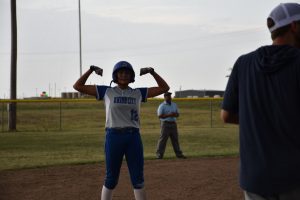 In the top of the fifth, the game was all tied up, leaving the crowd on the edge of their seat. Finally, the Union City Tigers left the Cashion Wildcat in the dust when Freshman, Makenna DeLong hit a line drive triple down the right field line which brought home Senior, Chelsea Morgan to take the lead. The Lady Tigers would not look back from there.

Seniors, Brionah O’Neal, and Allison Kaulaity tacked onto the lead to run the score to 12-9. This was the Lady Tigers first home game of the year which they won in comeback fashion after being down 7-0. This improved their record to 2-3 on the young season. 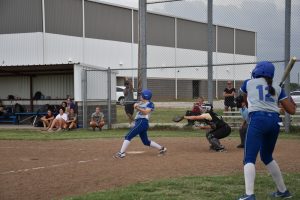 Mackinzie DeLong and Brionah O’Neal led the team with 2 hits each. Senior, Kenadee Belcher and Sophmore, Kylie McCoy both tacked on 4 RBIs. Pitcher, Mackinzie DeLong toed the rubber and went 5 innings for the win.

On Saturday the Tigers dropped a game to Geary by a score of 13-9. Union City will be back in action today as they will travel to Okarche for a three-way with them and Ninnekah beginning at 4:00.