This was not the season the Tigers wanted, but they came out and gave it their best. The Tigers ended the season with a 9-15 record and brought home hardware for the second straight year under Coach Robert Duvall. The Tiger’s hardware came from placing third in the Paden Tournament in late January.

Districts did not go as planned, the Tigers came up short. Senior, Bryson Hays, had a career game. Hays had a great final game scoring 17 points, tallying up 114 rebounds, and shooting 64% from the free-throw line. Pizano had a great year, leading in almost every stat.

Senior, Hunter Horton, finished strong in his final year following right behind Pizano in the assist column with 61. Reed Miller finished with 71 rebounds.

Keegan Cummings also supported his team with clutch free throws and became a leader to his team. Although Cummings had a late-year injury, he shot 78% from the line. These seniors had a memorable final year and helped all the younger classmen be at their best through good and bad times.

This season stats had a big jump from last season, due to hard work in the off-season. Pizano lead in free throw percentage with an astounding 73% from the charity stripe. Pizano also led in 2 point field goal percentage shooting with 45% on the year. To follow with a great shooting touch 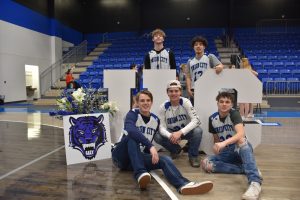 , he led the team in steals racking up 59 over the season. Sophomore, Skyler Kimberlin, had 197 rebounds on the year. The leading scorers this year were junior, Tyler Ross, with 293 points averaging 12.9 a game, Pizano had 230 averaging 10.0, and Kimberlin had 214 averaging 9.3.

This team will be remembered for their defensive plays and their determination to make their coach proud. The seniors left a huge impact on this team and will be missed. These seniors had heart throughout the season and will be leaving big shoes to fill next season.