Although Union City ended its first-ever fast-pitch season in late September, the work did not stop. The Lady Tigers made a plan to get not only stronger but also faster and all-around more confident on the field. The ladies kept up a steady schedule of lifting weights, CrossFit, defense, and hitting in the long off-season. The Lady Tigers prepared themselves for their season full of games by scheduling a scrimmage on February 25th against Riverside.

The scrimmage allowed the ladies to get their pre-season jitters out and allowed the coaches to see where players fit best on the field. The Lady Tigers played hard through the cold weather and got some tips on what they needed to work on before their first game. 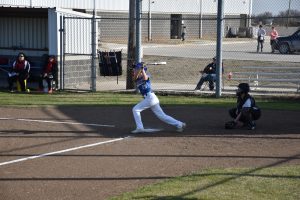 On March 2nd, the Lady Tigers had their home opener against Geary. The Lady Tigers came out on top with a final score of 13-1. Senior, Arin Karbs, pitched the season opener while the other Lady Tigers held her back on defense. The Lady Tigers looked strong in the field, making all the routine plays and keeping spirits high. Senior, Chelsea Morgan, kicked off the ladies’ first at-bat by hitting a triple down the middle and scoring senior, Brionah O’Neal. At the end of the second, the Lady Tigers were up 2-0.

The ladies made quick work in the second by getting three outs. At the bottom of the second, junior, Sabrie Locke, stepped up to the plate and scored herself and senior, Erica Rodgers, by being smart on the base paths and playing on the Lady Bison’s errors. Back at the top of the line-up, senior, Allison Kaulaity, knocked the ball right down the center and later scored on her triple. At the top of the third, the Lady Tigers were up 5-0, but with two outs the Lady Bison scored their only run of the game.

Senior, Kenadee Belcher, hit a double and helped tally up to two more runs for the Tigers. Morgan got the last hit of the game, which was a double right up the middle. After the game, Coach Cody Schmidt said, “We came out a little slow, but eventually got the bats going. Our defense played great.” The final score was 13-1, and you can see the Lady Tigers back in action in the Dibble Festival on March 9th and 10th!