After having a big momentum swing late in the season, the Lady Tigers traveled to Fletcher for districts where they played a three-game series. Union City has a very young fastpitch program compared to the traditionally very well-rounded Fletcher Lady Wildcats; however, the Lady Tigers snagged a win over the Lady Wildcats and made history by winning their first-ever game in fast pit 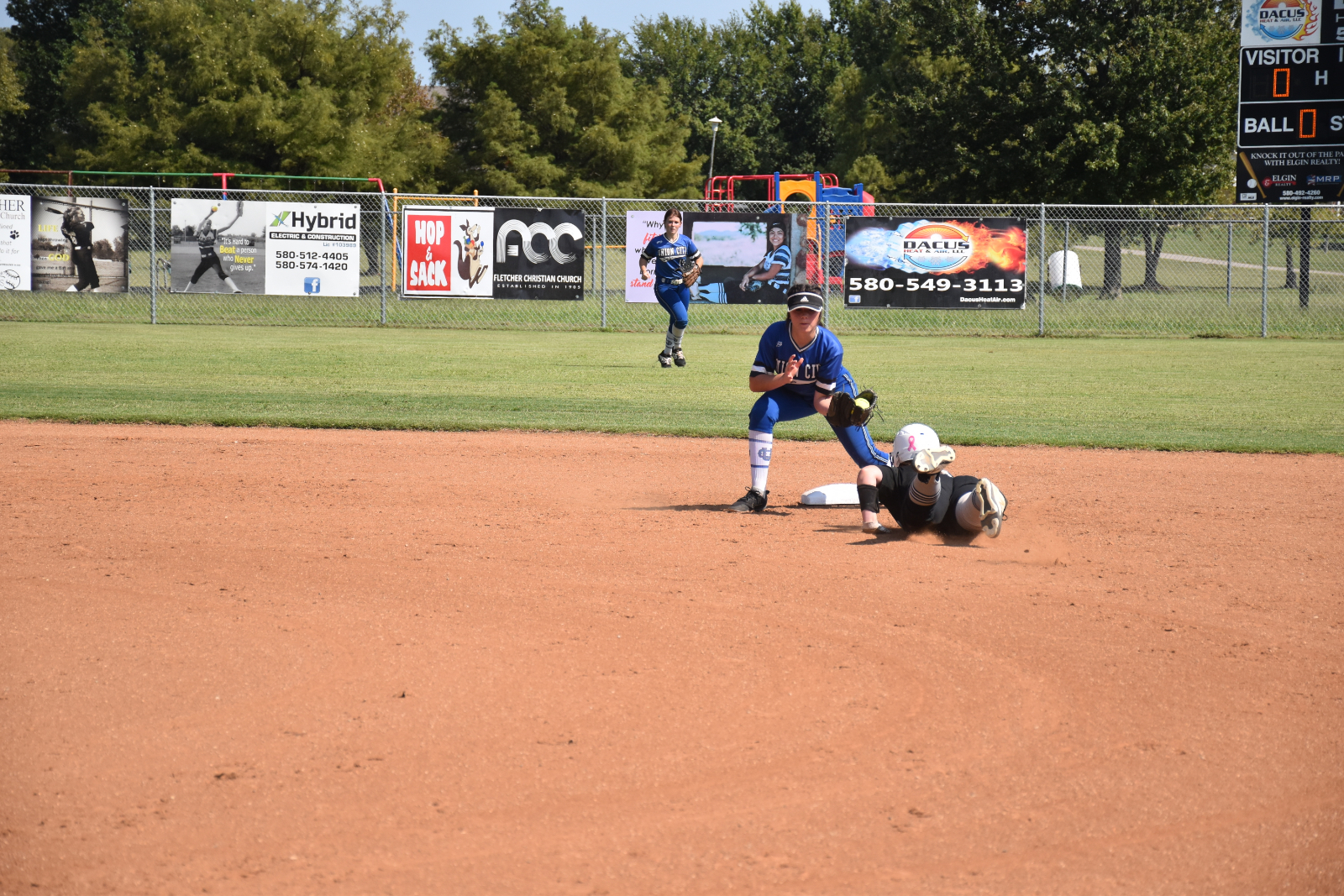 The first match-up was a slow one with neither team having a strong start at the plate. Fletcher got a quick jump on the Lady Tiger’s slow defense and picked up three runs in the first inning, but with that wakeup call in mind, Union City did not let the Lady Wildcats cross the plate again until the second game. One of the many big plays from Union City was in the bottom of the second when freshman, Haylie McCoy, snatched up a low line drive and turned a double play.

The ladies’ offense struggled at the plate but in the top of the seventh, the bats finally started swinging. Senior, Sabrie Locke, singled with a fly ball to the right with McCoy following with another single. The older McCoy sister, Kylie, also singled with a groundball to the shortstop. With bases loaded and two outs and the Lady Tigers trailing 3-0, leadoff, Oceanna Schranz, nailed a ball back to the pitched while scoring Locke and safely reaching first. With the score 3-1, two outs in the top of the seventh, UC was down to their final chance. In one of the biggest moments of the season, MaKenna DeLong stepped out from behind the plate to smack a double into centerfield and cleared the bases to put the Lady Tigers in the lead in one of the most historic comebacks in the Lady Tigers short history.

With the Lady Tigers now in the lead, with a score of 4-3, they knew they had a chance to do something great. For the bottom of the seventh, the ladies stuck their ground, 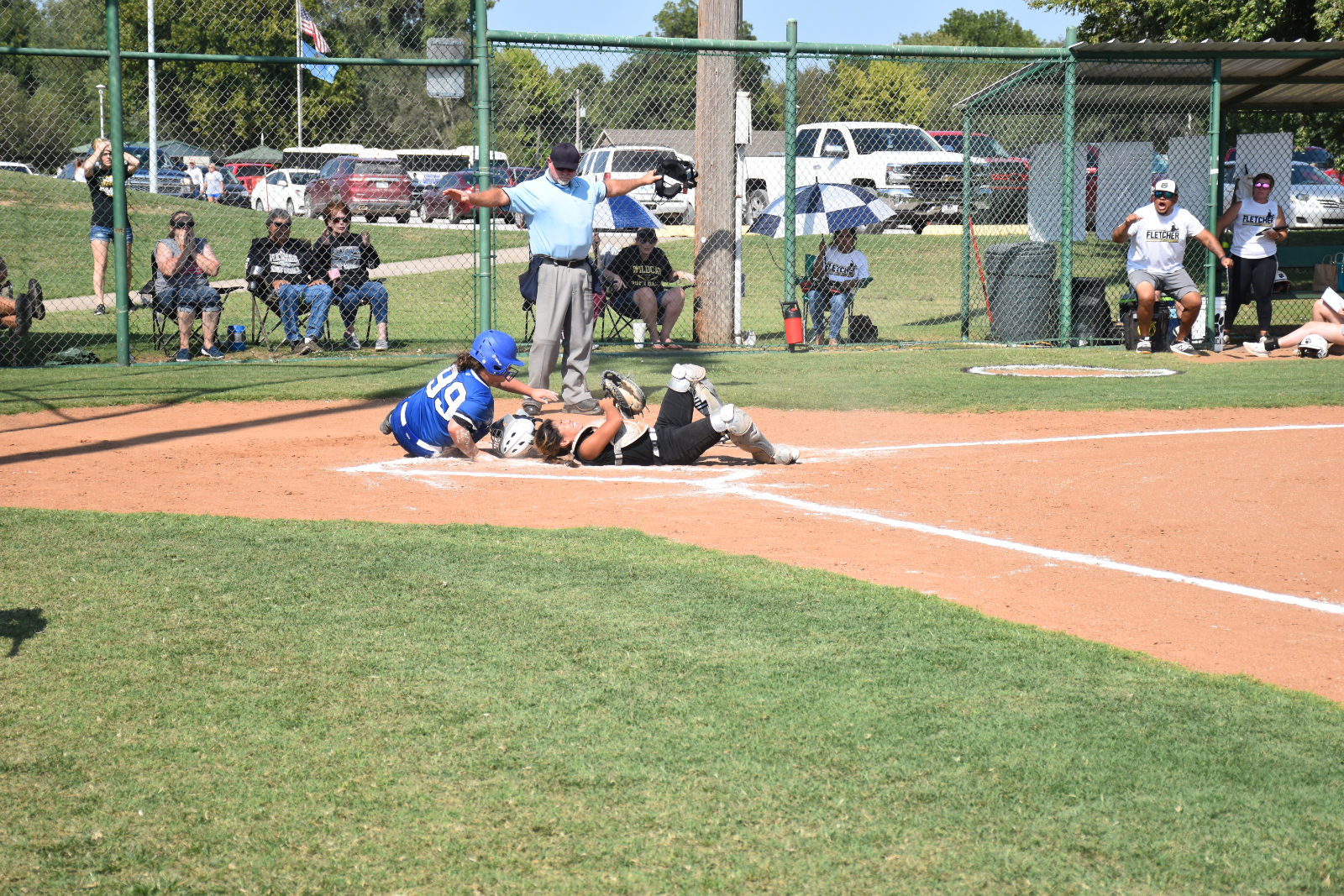 Schranz used her speed to catch a fly ball at second for the first out of the inning. For the second out, catcher, MaKenna DeLong laid out for a ball hit into foul territory and for the last out Locke used cat-like reflexes to catch a line drive hit right at her.

The Lady Tigers tried to keep their momentum going throughout the second game. In the first inning, the Lady Tigers had one single, three walks, and used Fletcher’s two errors to bring three runners in. The Lady Tigers struggled to tack on more runs, only scoring one more in the bottom of the third. The Lady Wildcats took advantage and scored in five of the seven innings. Union City continued to battle, but they could not catch up to the Lady Wildcats taking their first loss in districts with a final score of 8-4.

The Lady Tigers are ever-resilient and gave Fletcher a run for their money, with Union City scoring in three of the seven innings compared to Fletcher’s one inning. With no one scoring in the first inni 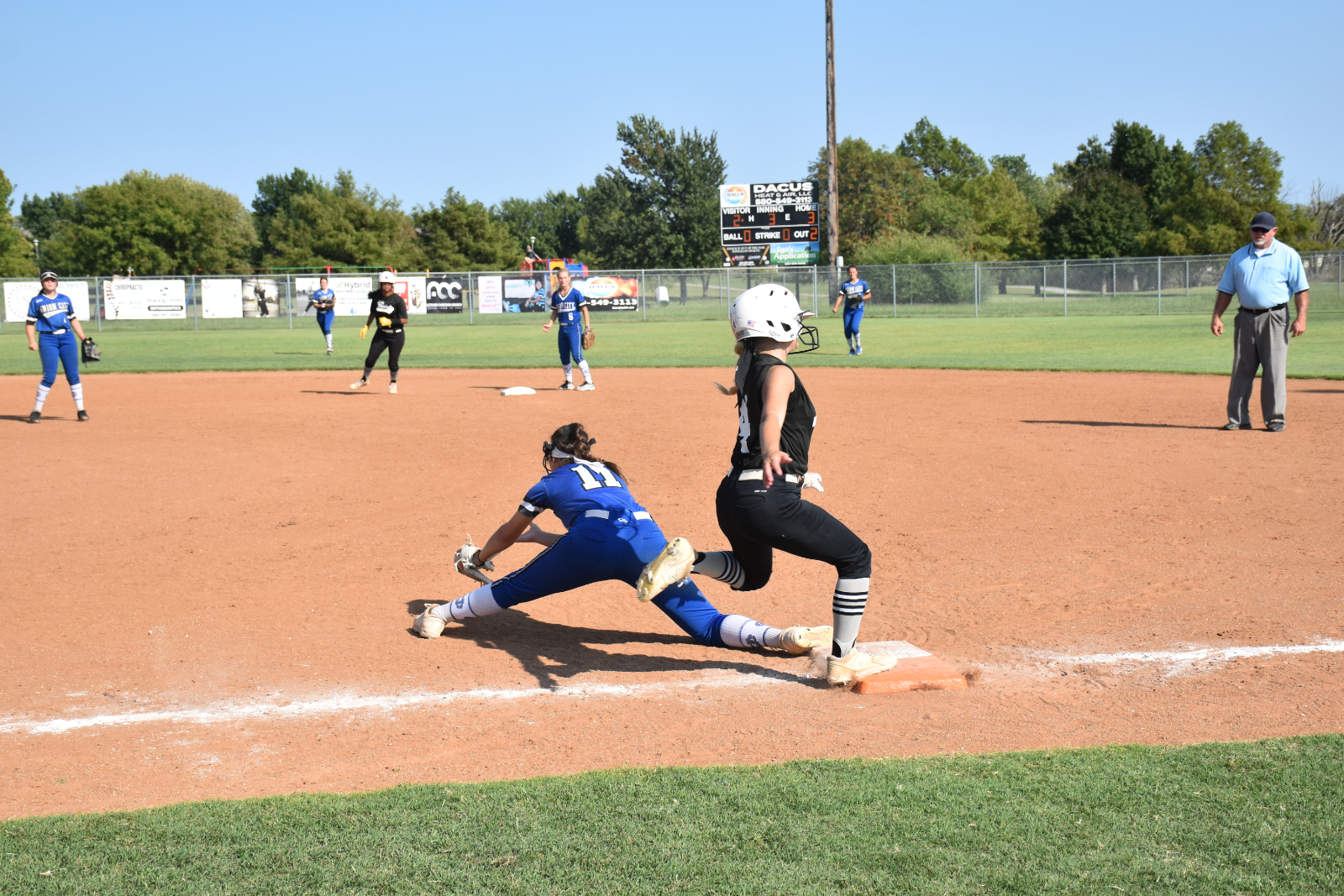 ng, Union City knew they had to get a jump on the Lady Wildcats. The ladies put up one run in the first and kept the Lady Wildcats at bay until the bottom of the fourth when Fletcher caught some momentum and took the lead back. With a score of 5-1, the Lady Tigers knew their season depended on getting base runners, therefore the motto for the rest of the game was “get it to the next girl”.

Union City took every chance they got, with MaKenna and Mackinzie DeLong getting hit by a pitch the ladies had runners on first and second. Senior, Emily Loughridge, stepped up and doubled on a fly ball to the right fielder and scored both DeLongs. With the score now 5-3, the Lady Wildcats felt the pressure and remembered the first game when Union City came back in the last inning to win.

The Lady Tigers held Fletcher in the bottom of the fifth, and with their motto still rolling senior, Meadow Schranz was hit by a pitch, and her sister, Oceanna, singled with a groundball to the shortstop. With runners on first and second, one of Union City’s strongest hitters MaKenna DeLong stepped up to make a big play. DeLong singled with a fly ball to centerfield and scored one. With the score 5-4, and Union City back in the field, the ladies only had one thought on their mind and that was to get back at the plate. The Lady Tigers made quick work of the sixth innin 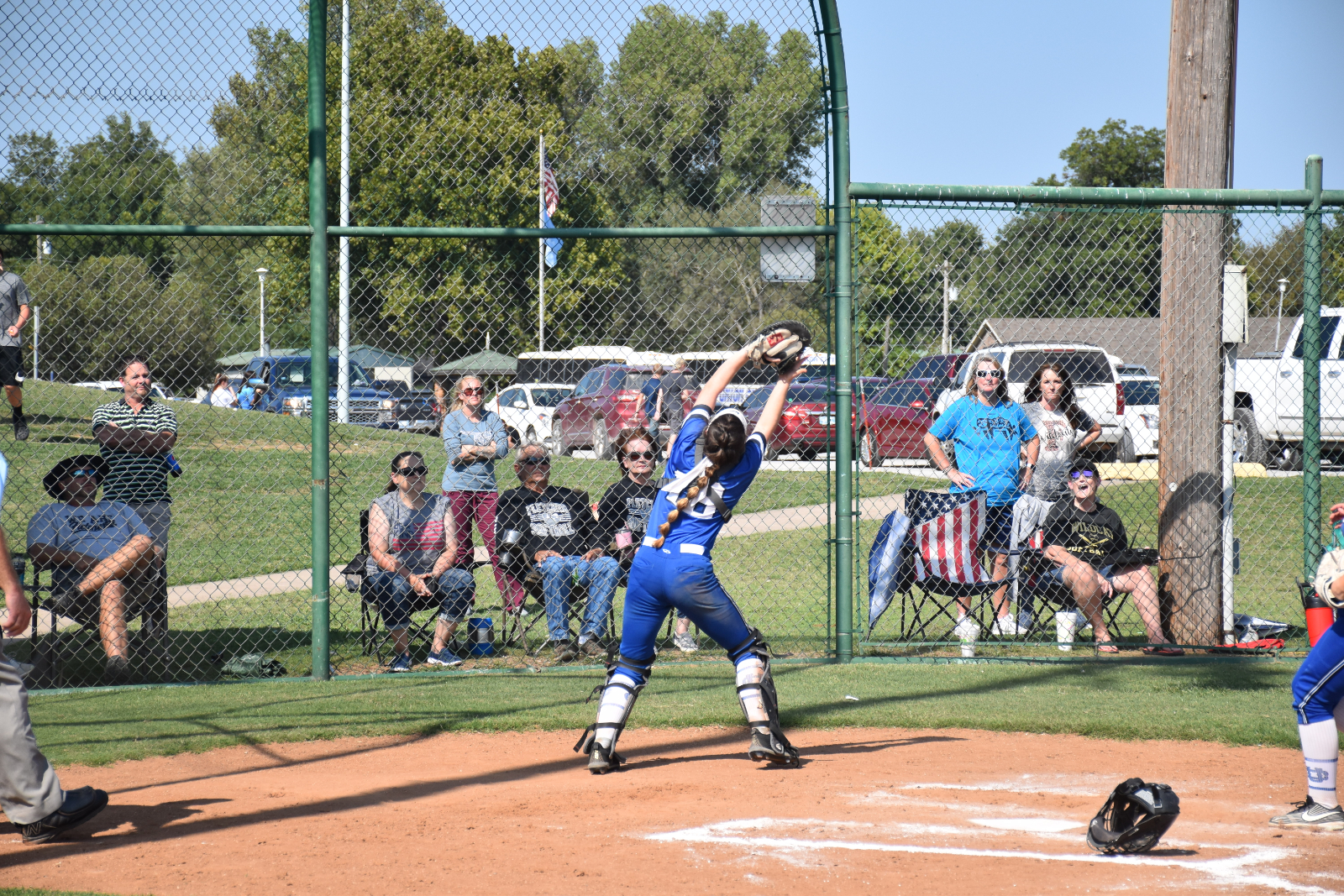 This was the last chance for the Lady Tigers to make history and win their first-ever districts. Loughridge popped up to the shortstop however was safe at first when the Lady Wildcat dropped the ball. Kaitlyn Linson hit a groundball and Loughridge was out at second on the fielder’s choice. Locke was intentionally walked, and her sister Payslie Locke stepped up and ran for her. Haylie McCoy made the shortstop work when she hit a hard groundball to her. Junior, Kylie McCoy, battled through every pitch that came her way, knowing that the winning run was on first. McCoy watched two balls and fouled off three balls. On her final pitch McCoy did her job and fouled off the ball; however, the Lady Wildcat’s catcher saw an opportunity and caught the ball in foul territory. The Lady Tigers fought with every swing of the bat but came up just short with a final of 5-4. 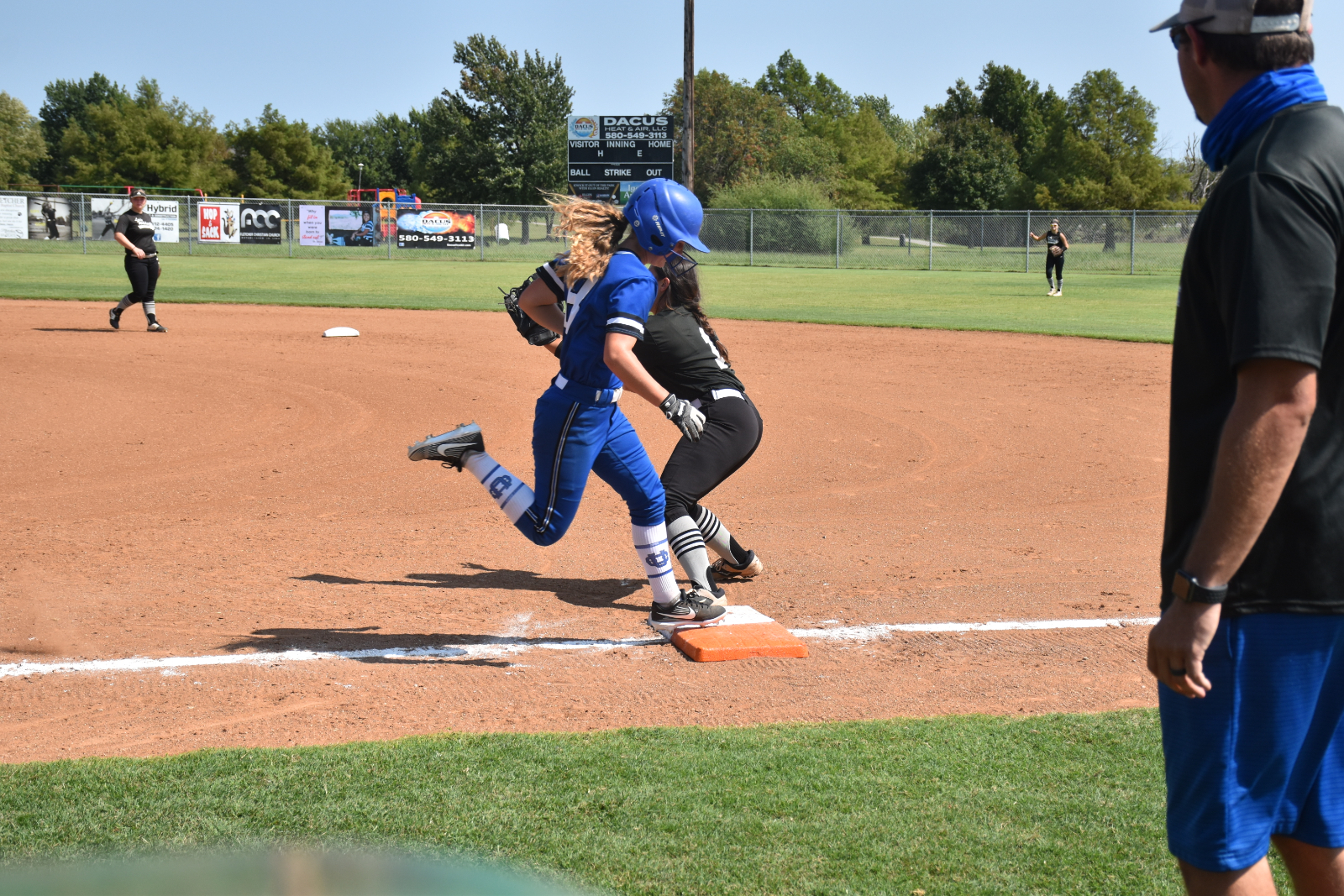 Emily Griggs had a long day toeing the rubber when she pitched all three games. Griggs threw for 20 innings and used her location to strike out eight batters in key moments. Over the course of the day, Griggs threw 279 pitches with 65% of those being strikes.