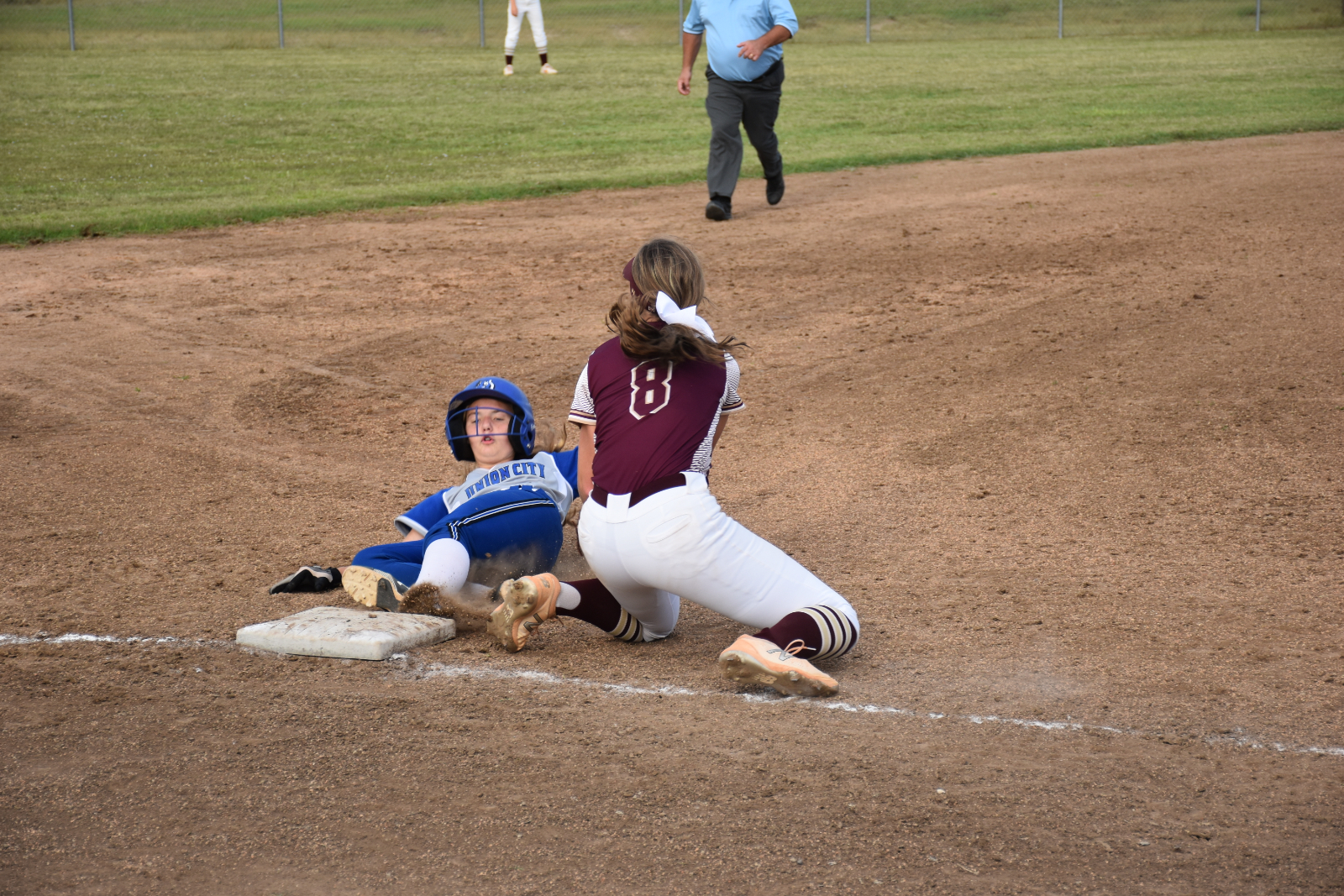 The Lady Tigers faced a lot of change and uncertainty at the beginning of this season with the Covid-19 virus and open starting positions after graduating six in July. The Lady Tigers only played one summer game, but they were determined to make history this season. When asked about his thoughts at the beginning of the season Coach Benge commented, “…we didn’t really know what to expect but we knew we had a really gritty group who was willing to do whatever it took to be successful…” As a team, the ladies and coaches set a goal to get ten wins and improve on last year’s record.

For their season opener the ladies faced Ninnekah, would they later be paired up against for districts, and they struggled at the plate only picking up five hits and no runs. Although they started off the season 0-1, Union City knew they had to be patient and work together as a team. Their next game the team did just that when they took Calumet into extra innings and snagged their first 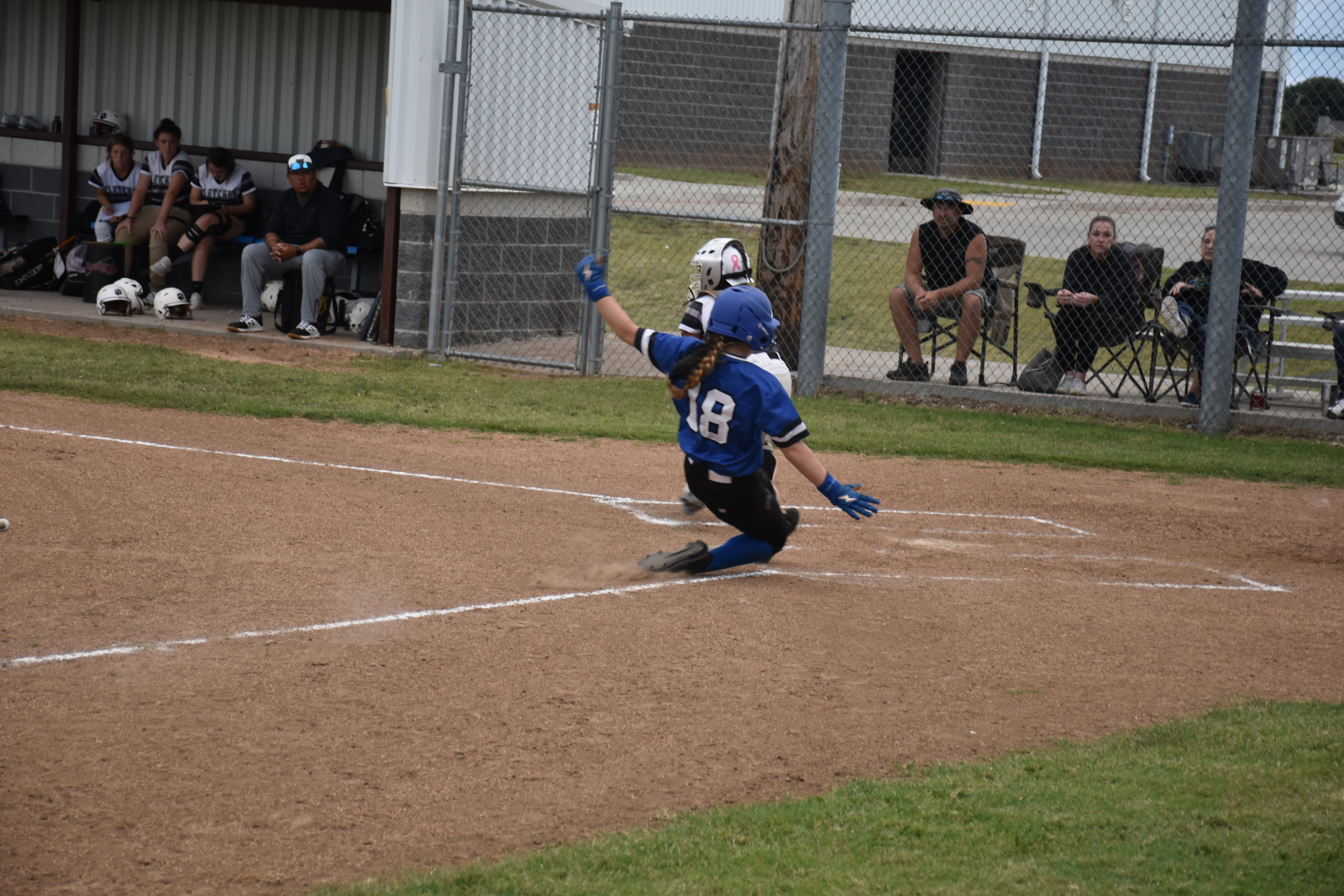 win with a score of 16-14. Over the first week of the season, the girls in blue went 2-5 before going on one of their many win streaks. After the first week, the team sat down and had a meeting to talk about caring and giving max effort at all times. Coach Schmidt stated, “…that seemed to really be a point in time where our team meshed and became a family.”

The next week of the season was one of the best runs the Lady Tigers had when they won five of the six games, picking up wins against Dover, ranked Geary, Carnegie, and Alex. The Lady Tigers had found their spots and hit their stride with a record of 7-6.  The next few games were tough due to rainy weather; however, the Lady Tigers only lost three scheduled games due to weather over the whole season. This was a rough week for Union City when they played few games and lost the games they did play; however, they bounced back and hopped on another win streak. The streak started with a shut out against Verden, with a score of 8-0, and set up the Lady Tigers for districts. 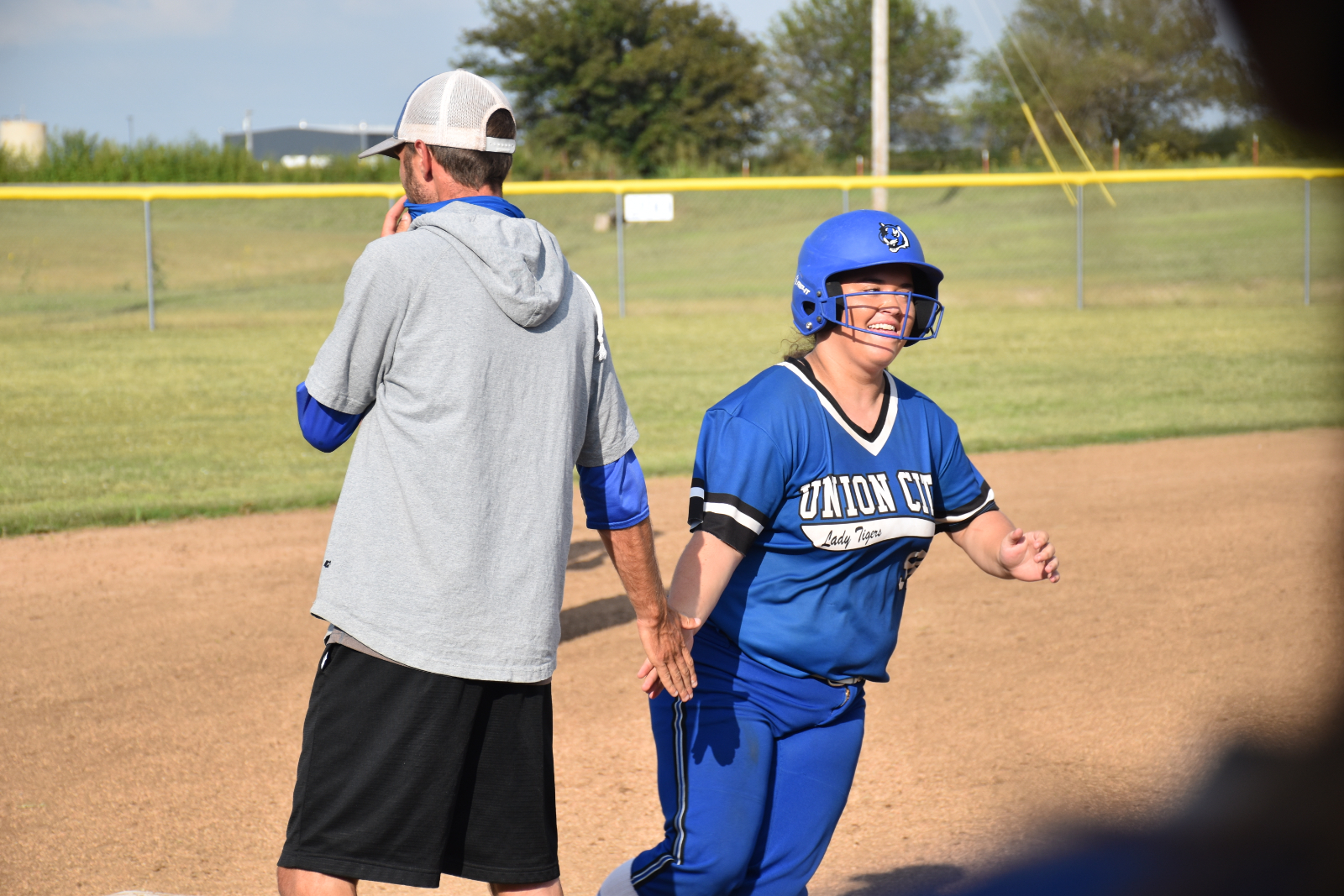 ed their first-ever Senior Night to honor their three seniors, Meadow Schranz, Sabrie Locke, and Emily Loughridge. The night started off with Calumet, who Union City was 1-1 with this season. Locke set the mood for the night when she smashed the first-ever home run in UCHS fastpitch history. With insane dugouts and supportive stands, the Lady Tigers took off run-ruling Calumet 10-0 and they carried this energy into their last game of the night against Cashion. The Lady Tigers aggressively ran the base paths and made the plays at the plate and in the field to ensure another run-rule with a score of 17-7.  Senior, Sabrie Locke stated, “My favorite memory from this past season was our Senior Night with all the love and support I felt from our team, coaches, families, and community. It was so heartwarming and I will cherish that day forever.” The win streak continued with another win against Cashion and Bray-Doyle.

The Lady Tigers saw a chance to make history when their district pairings came out. Union City would be playing Ninnekah and Fletcher, and the determined Lady Tigers looked to win their first-ever district title in UCHS softball history. With their last regular-season game at home against Fletcher, the Lady Tigers wanted to 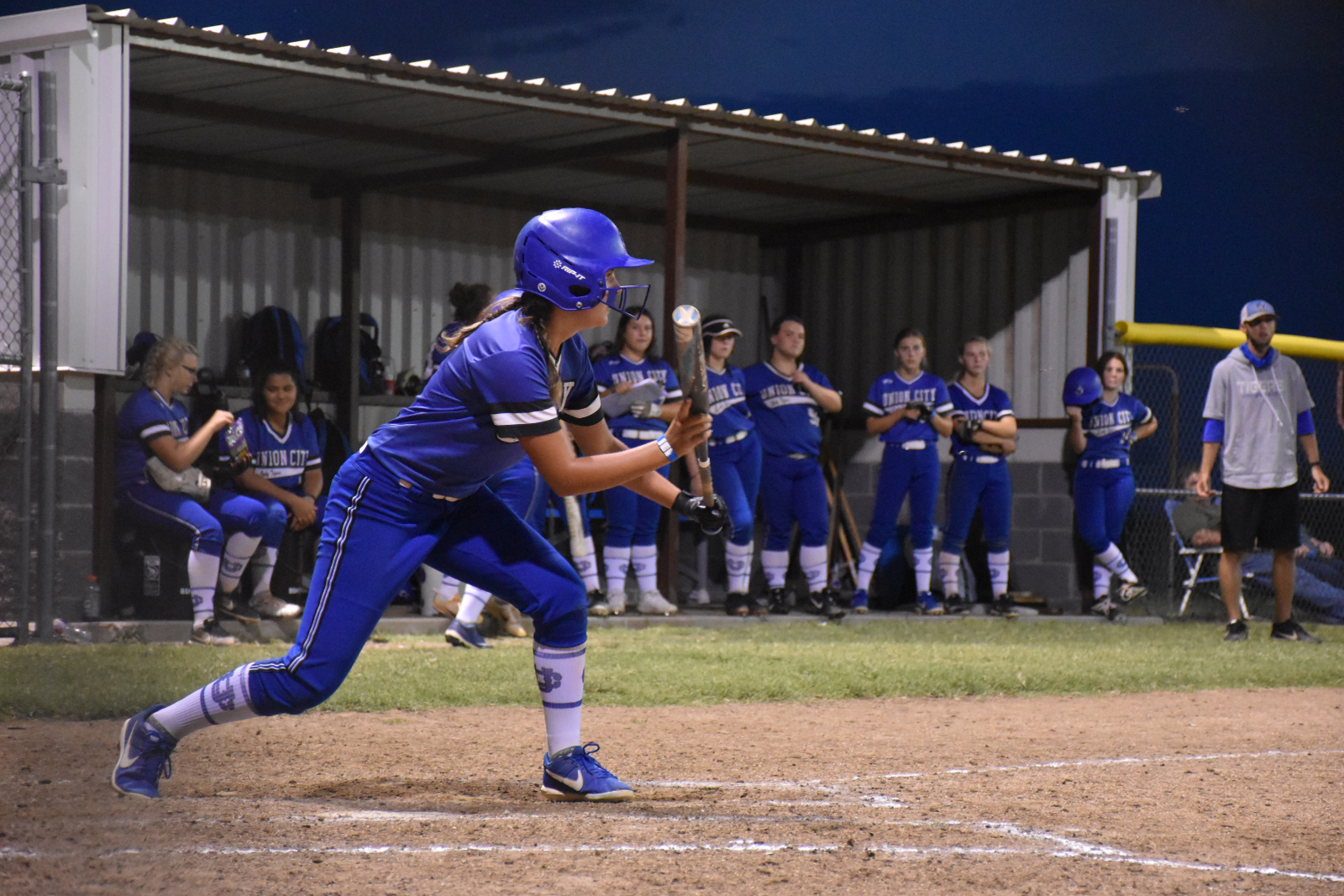 show up for their home crowd. The Lady Tigers did just that when Union City picked up 11 runs on 16 hits and kept Fletcher in the single digits. The Lady Tigers’ sticks on fire with triples hit by Loughridge and MaKenna DeLong and doubles by Mackinzie DeLong and Locke. Loughridge led in RBI’s with four and Locke followed with three. The Lady Tigers went into districts with a record of 14-11, and their last regular-season game was a success with a final of 11-6.

Senior, Emily Loughridge mentioned, “I have never been more honored to play with a group of girls before, and as much as I wanted to make history I knew that no matter the outcome it would be a season that none of us forgot. Since we are a small town with a two-year program a lot of people counted us out but we shocked a lot of people and I am beyond excited to do that again in the spring.”

On September 24th, the Lady Tigers took a day trip to Fletcher for districts, in which sadly Ninnekah had to drop out of. Fletcher and Union City began their three-game series and went late into the evening playing all three games. The first game kept

the fans on the edge of their seats as the Lady Tigers caught everyone by surprise in the last inning. Fletcher had a 3-0 lead the entire game until MaKenna DeLong had one of the biggest hits of the season to score the winning runs. With the Lady Tigers 1-0 for the day, they looked to pick up their second win for the day. In the second game, Fletcher slowly picked up runs through all seven innings while the Lady Tigers struggled to safely cross home and Union City took a tough loss with a score of 8-4.

Senior, Meadow Schranz smiled and said, “I loved seeing this group of girls become family. We were always goofing around and making each other laugh, No one really fought, and if anyone did, it didn’t last long.” Throughout this season, you could see the bonds these girls built together and in the end this led them to be an extremely competitive team. 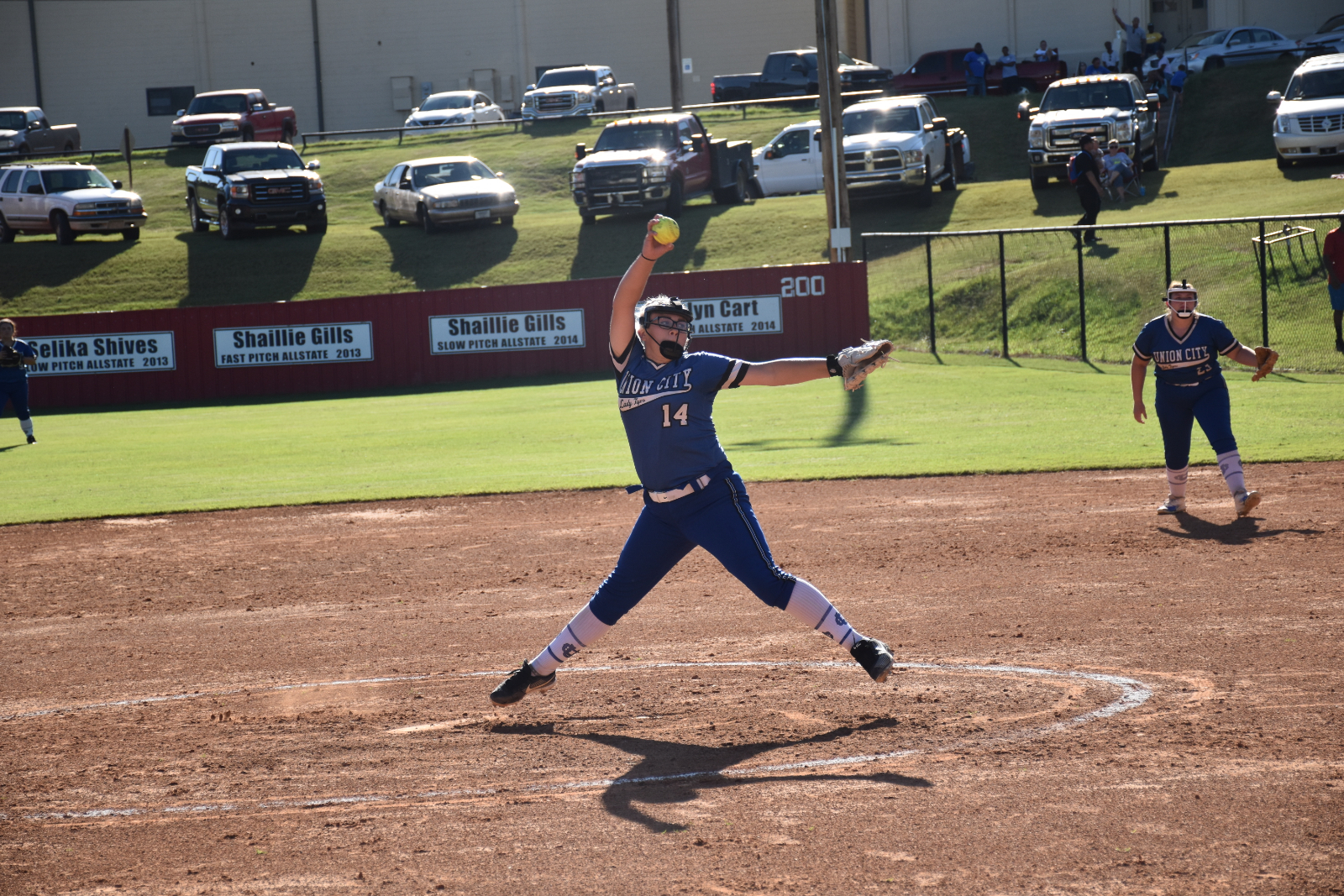 The final game was crucial because this was the last chance the Lady Tigers had at continuing their season. The last game started with a small lead by the Lady Tigers; however, the Lady Wildcats responded with five runs. Union City was resilient though and brought themselves back into the game with a score of 5-4, but with the winning run on the first, the Lady Tigers could not bring her home. Although the Lady Tigers did not continue their season they put everything they had into those final games and completed all their goals set earlier in the season. With a final record of 15-13, Union City got ten wins and improved on last year’s season.

Benge also said, “We not only did that but we had a winning record and were two runs away from winning our first district title. As much as it hurt to lose that, looking back on the season and all the ups and downs and how everyone supported  each other in the dugout, at practice, and on the field, wherever it may be, it was one of the most successful seasons we have ever been apart of.” 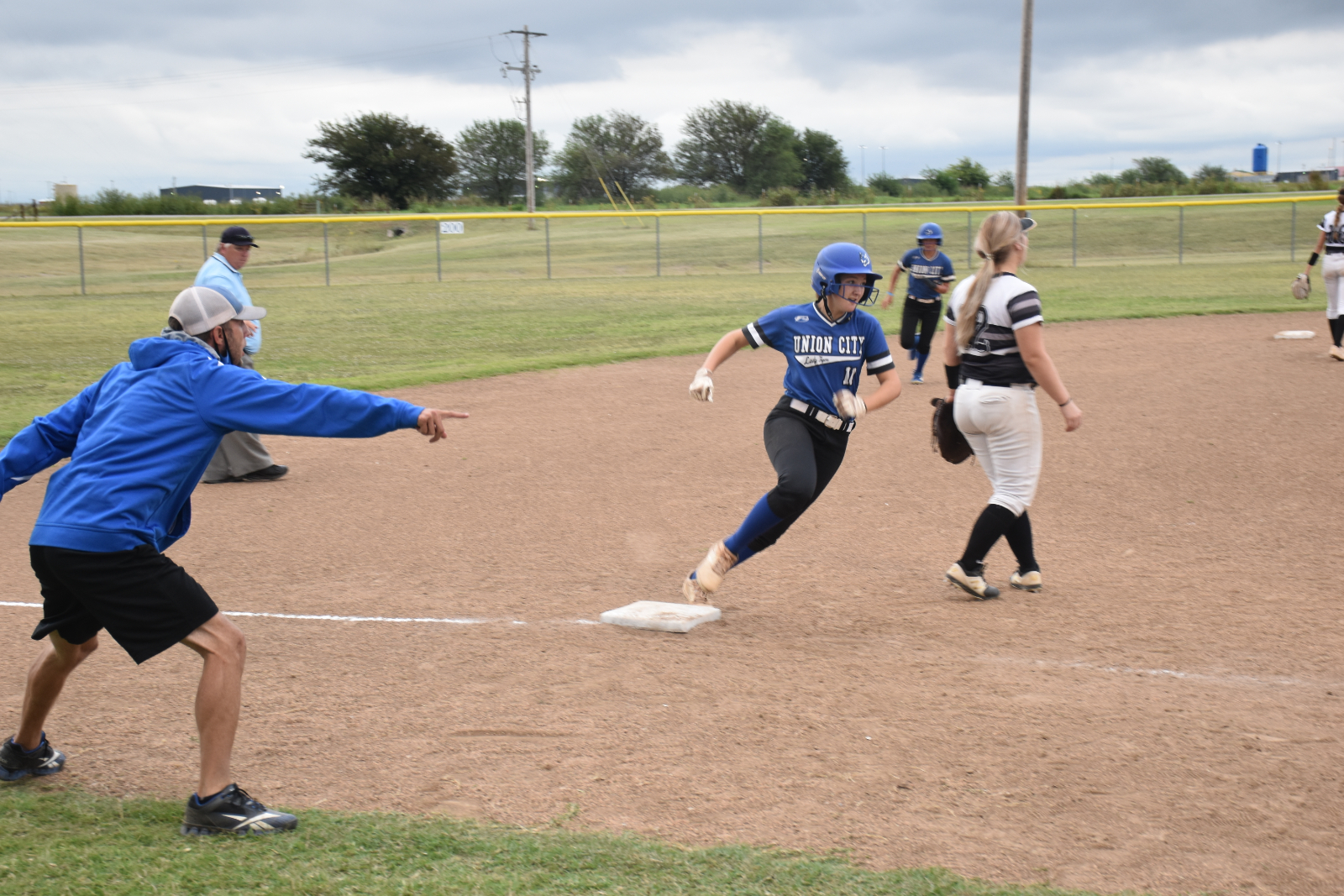 MaKenna DeLong was one of Union City’s biggest hitters this year with 35 hits on the season, Mackinzie DeLong followed her closely with 34 hits. The team supported each other on the base paths too with 152 RBI’s for the season, and speaking of basepaths Oceanna Schranz flew around them this year with 17 stolen bases. Although the Lady Tigers picked up 100 free bases they obviously preferred to put the bat to the ball with 196 hits this year.

While offense is key to softball, defense is also very important which is why sophomore, Emily Griggs, took control of every chance she had to help her team. Griggs threw 1,933 pitches this season over 103 innings and of these pitches 58% were strikes. While toeing the rubber, Gri 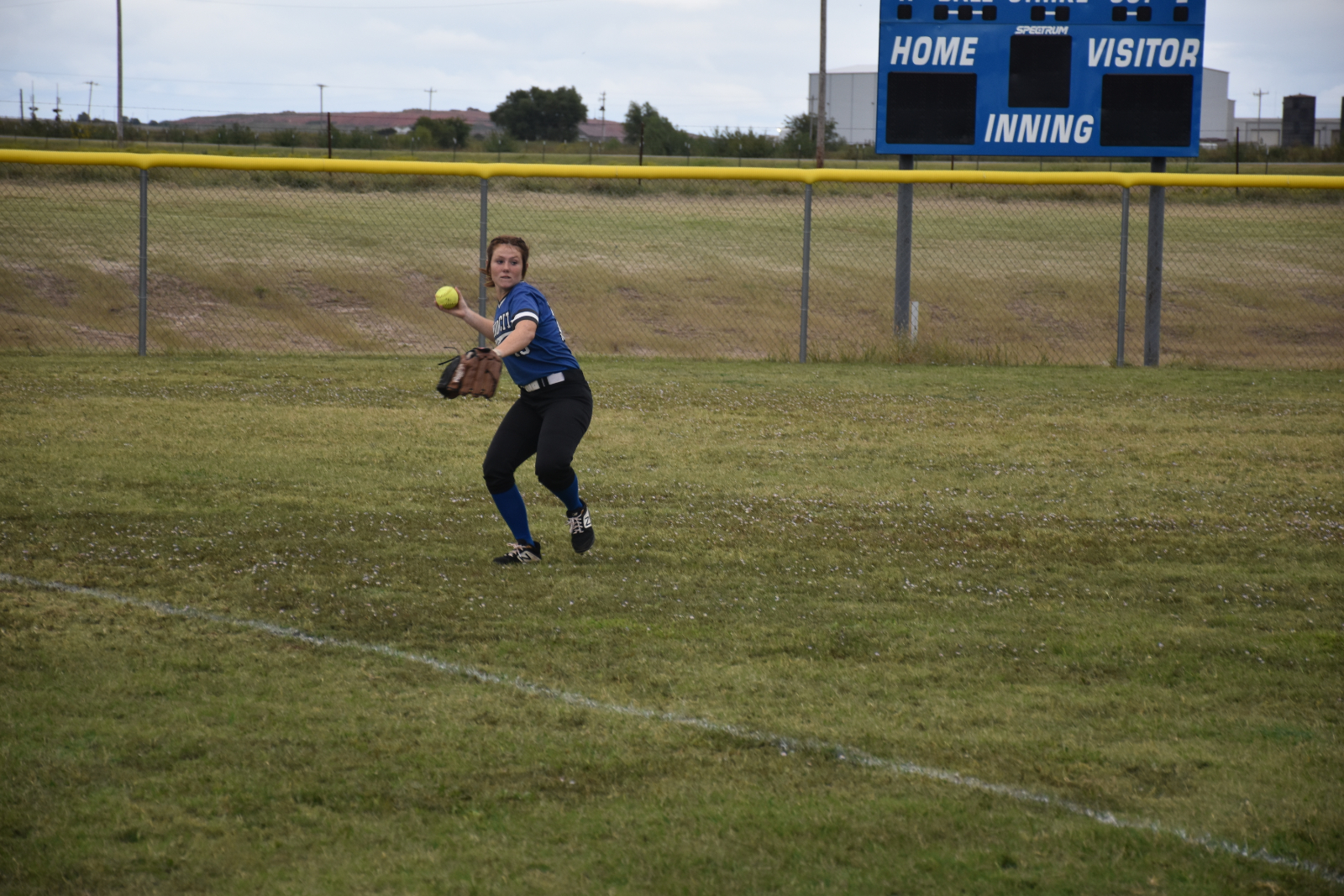 ggs tried to get ahead in the count which is why first-pitch strikes are important and Griggs threw 55.8% first-pitch strikes. Another starting pitcher for Union City is Mackinzie DeLong, who also stepped up to help her team, she threw 55% strikes this season in crucial games. DeLong also got early leads against the batters with 52.1% first-pitch strikes. Freshman, Haylie McCoy, took charge and became the starting shortstop and turned three double plays this season; Loughridge also assisted her team by turning two double plays from centerfield. Junior, Kylie McCoy, frequently showed off her cannon from the outfield throwing out five baserunners this season, two of which were in districts causing a chain reaction of good plays for the Lady Tigers.

Although this season did not end how the Lady Tigers and their coaches wanted Schmidt smiled and said, “I’m excited for this spring to be able to coach this group again, I would not trade this group for anything” he took a minute to think before continuing, “…we are going to do something really special.”